This is the second in a series of articles praising some of the tools that I have found to be “Secret Weapons”—tools that have proven unreasonably and repeatedly effective throughout my career, and that I think are not as well known or appreciated as they should be.

That’s all fine and good, but the (IMHO) important part comes later on the page:

The Graphviz layout programs take descriptions of graphs in a simple text language, and make diagrams in useful formats…

In other words, Graphviz lets you take a graph.dot text file that looks like this… 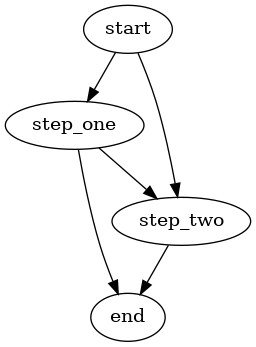 That’s a very simple example—Graphviz can do much, much more—but the heart of what makes Graphviz a secret weapon is already on display here: your graph is represented as text, which means it can be version-controlled, diffed, and programmatically generated with ease.

A few occasions on which Graphviz has saved my bacon / the bacon of the team I was on:

Graphviz is a supremely useful utility when you want to version graphical representations of flows, visualize steps in complex processes, or instrument call-graphs. Give it a try.